You are here: Home / Blog / Why Do Dogs Lick Everything? 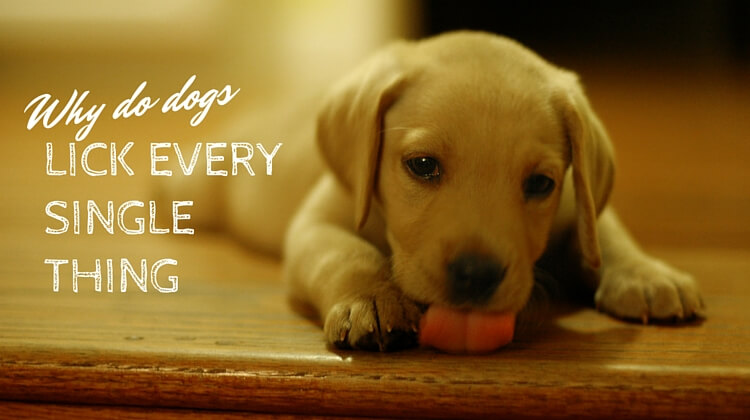 You and your canine buddy enjoy long walks in the park and exploring the hidden, quiet nooks and corners of the city.

After returning home from an exhausting adventure and giving your pooch his much required water bowl, just as you attempt to take your desired couch snooze, your warm, furry friend has jumped all over you, slobbering your face with lick after lick. Does this happen every time you offer him or her a sign of affection? And if so, then why do all dogs lick?

The reasons to why a dog licks you are innumerable. A lick is one of the basic ways our canine friends try to communicate with us.

Just like a dog’s bark, licking is an important means of communication and a common behavioural canine trait that can be interpreted in various ways.

Licking has always been part of the canidae natural instinct. Right from the time a pup is born, a mother licks her puppies and the pups in the litter lick each other. This can be seen as a sign of grooming and other social interactions. This forms the basis for all other licking decisions that a dog makes in the canine world.

Hence, it is completely normal for a dog to start licking you every time you affectionately pamper it.

While some people may be content with this form of behavior, others choose to curb this habit. As this is a built in, natural instinct, understanding what your dog is trying to tell you is one of the best ways of communicating with them. Here’s a list of the many ways in which we homo sapiens have interpreted our four-legged counterparts distinct mode of communication.

So, why do dogs lick everything?

“Let’s get out taste buds rolling!”

Dogs lick their food and water bowls, even the floor and counters after a spill, or the cooking leftovers.

It’s normal to conclude that it is the dogs curious taste buds that have led them to this inquisitive licking spree, eventually leading them to lick the tiny, inconspicuous leftover food particles that remain on our bodies along with the strong taste of salt on our skin.

Grooming can be a reason why dogs lick

Licking is a natural trait which puppies inherit. From the day they are born, mothers lick their pups to groom, clean, comfort and mark them.

As puppies get older, they learn that licking their mom will lead to their mother to feed them a few morsels. This learnt behaviour can be interpreted into many messages and is practiced by pups on themselves, other animals and eventually, on us.

Dogs also lick you to leave their scent on your skin thereby claiming you as theirs. This can be seen as a dog’s marking method which is definitely a better alternative than others.

Train your pet to understand that one or two licks are good enough.

The theory of whether dogs saliva is healing or not is an ongoing debate.

For centuries, armies went to battle with packs of dogs for protection as “medics.” Their task would be to lick open wounds, keeping them clean, free of germs and disease. Till date, this belief still exists in some cultures.

Dog saliva has healing properties which contains enzymes that kill off bacteria.

Dogs lick themselves to get rid of dead tissue and clean dirt from wounds. But when the licking becomes excessive, it may reopen wounds or cause other kinds of harm. By keeping a watchful eye over these excessive licking traits, you can help save your pet from harming himself, assuring your role as their protectors and guardian.

Just like humans suffer from Obsessive Compulsive Disorders (OCD), dogs , too, have the tendency to obsessively lick themselves. If you notice that your dog is licking the same object or area over and over again, seek medical help right away.

Sometimes your dog may seem scared or troubled which may cause them to release their stress levels through a series or repetitive licking sessions. While obsessive licking reinforces anxiety, it makes the problem worse causing it to become an annoying habit and a serious neurotic, behavioral issue indicating a medical problem.

Sometimes your pets minimal licking spree may intensify with time, making your dog lick you all over your face. Whether or not this is socially acceptable behaviour would completely depend on how you train your pooch.

Dogs communicate amongst other pack members by licking and smelling each other, exchanging emotions of sorts which could be a sign of friendship, hunger or submission. They do this with people as well, but as we’re not as good at interpreting the message, we’re often left confused with mixed signals and respond in the opposite manner.

If you’re caught in a situation where your dog is intensely licking you, check to see if your surroundings lack anything they require. Your dog may need something, so take a look around and check to see if the water bowl is empty or the doggie door is closed.

According to dog pack behavioural traits, pups lick their mothers indicating that it’s feeding time. Researchers state that this is just another sensory tool and can be compared to human exploration traits like reaching out and touching something.

Probably the most common reason that domestic dogs lick. Sadly, not every pet owner takes to this kind of greeting and affection differently.

Many pet parents choose to change this dog habit. Pleasurable endorphins are released when dogs lick for affection, calming and comforting them. This can be seen as canine attention-seeking behaviour. They may lick you to get your attention or it may be a way of playing.

Going by the pack rules, lower-ranking pack members lick their superiors to be accepted and invited to dine on communal prey. No matter the breed, licking the face of another dog is the universal message of dog submission or it could be affection.

This ancient type of behavior has been around since the time they were wolves.

When the leader of the pack, or the Alpha wolf or wild dog returned from the hunt with prey, the other subordinate members of the pack happily greeted them, but always waited their turn to eat. By cowering and licking the mouths of the more dominant members of the pack, they displayed their affection and submission. Maybe this behaviour would land them a scrap or two.

Pet parents often complain about being “licked to death”. Even though this habit has travelled through generations of the canine family, it can be curbed.

Remember, Dino, the pet dinosaur that enthusiastically greeted his owner, Fred Flintstone every time he returned home? For most of us, this would be the best form of greeting to receive on returning home after a long working day.

Still wondering why do dogs lick?

The verdict: All dogs lick and will continue to lick… EVERYTHING!