You are here: Home / Blog / How to Stop a Dog from Chewing Everything? 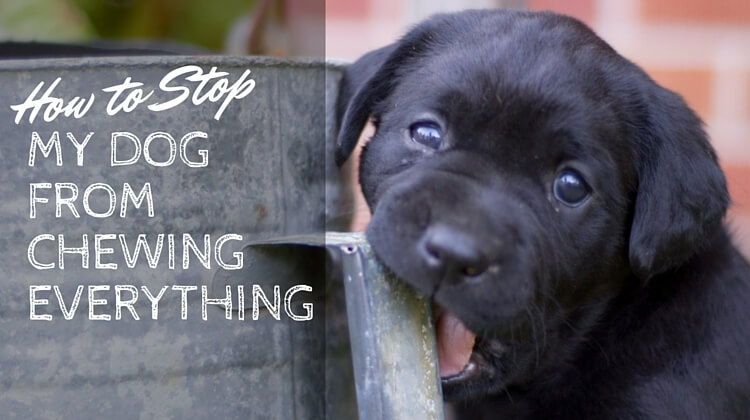 At some point of time you’re bound to return home to see your dog in pile of tattered shoes and paper. Dogs make great use of their senses such as sight and vision to explore the world around them, especially by putting stuff in their mouths to learn more about it.

Fortunately, inappropriate chewing could be redirected towards better items so that your dog isn’t destroying valuable things or chewing on hazardous items.

This is why it’s important to learn how to stop your dog from chewing things that could be potential threats to their well being.

Puppy chewing is an important part of the teething process. Adult dogs may chew or tear up things, like paper, for fun, or to relieve boredom and stress. Until it learns what it should and shouldn’t chew, it is the pet parent’s responsibility to deal with this properly by keeping unacceptable objects at bay.

Even though chewing is normal behaviour for puppies, overtime it begins to be seen as undesirable behaviour when it persists for long periods with your dog chewing up inappropriate objects such as your shoes, furniture, even your hands and feet.

Remember that if inappropriate chewing is not corrected at the right time and place, it can lead to a negative emotions between you and your best friend. Not to mention destruction of personal property and a list of medical problems.

Understand why your dog is chewing everything

Just like all other babies, puppies explore stuff in this new experience by putting objects in their mouths, tasting, licking and chewing everything interesting in their midst.

The discomforting teething process lasts for about six months, which is why chewing relieves their sore gums. On the other hand, mature dogs may display cases of destructive chewing for numerous other reasons. It is important to determine why your dog is chewing in order to curb the habit.

A few reasons for this sort of chewing destruction

How to stop your dog from chewing your stuff

Rule out medical problems that could be associated with your dogs chewing habits.

Schedule a vet visit to be sure that your puppy does not have any serious medical problems.

Many a times, inappropriate chewing is the product of nutritional deficiencies caused by poor diet or intestinal parasitism. Gastrointestinal problems ,which is nauseas even for humans, can initiate chewing as a coping mechanism.

When it comes to serious problems like separation anxiety and fear related behaviour, consult a behaviour professional or veterinarian and seek their help.

Teach your dog what he can chew and what can’t.

Take control of your surroundings by managing your belongings, books, clothing, shoes, trash and remote controls, away from your dog’s reach.

Puppy- and dog-proof your house.

Manage your home by “puppy proofing” our houses. In order to keep children out of reach from possibly dangerous objects, we follow a method known as baby proofing wherein we learn to put shoes in the closet, sharp objects in child proof draws.

A similar process must be followed when you’re supervising your pups, and when you’re not around, put the pups in a crate. Even many adult dogs need the same type of management to keep them out of trouble.

Get your dog chewing toys

Give him a chew toy or a bully stick instead, according to his age and size. If your dog attempts to chew on an inappropriate item under your supervision, simply interrupt the behaviour by re-directing him to an appropriate chew toy like a stuffed Kong toy, which is a popular chew toy with dogs.

Other chewing toys to keep your puppy busy and stop it from chewing everything else could be the following:

Pups tend to chew only at certain times of the day. Distract your pups with fun toys instead like nylabones, greenies and dental chewsticks.

Make him obsess over toys by using his toys to feed him. For teething puppies, let them chew on a cold washcloth. The cold fabric provides a soothing feeling on his gums. But make sure that he doesn’t chew and swallow any pieces of it.

Avoid rawhide, chicken bones and beef bones as their sharp edges and hard textures make it hard to digest. They can get stuck in the esophagus or small intestines and puncture your dog’s gastrointestinal tract.

Supervision when giving these treats is also recommended to ensure that no small pieces are swallowed. Make sure that the hole in the kong toy is not big enough to get stuck in the dog’s lower jaw stuck.

Refrain from giving toys that resemble the inappropriate items like shoe toys or an old worn out shoe to chew on as dogs find it difficult to understand the difference between the old chewed shoe and a brand new pair.

Use bad-tasting repellants and sprays.

Spray items with Bitter Apple spray or Boundary dog repellent or any other safe unpleasant tasting sprays. The dog will make the decision not to repeat that behaviourism his own.

Supervise your dog when you try any of this. As some dogs continue chew something even if it’s coated with a bad tasting deterrent , you may need to reapply some of it to keep it effective.

A tired dog is a good dog. Give your pooch plenty of physical and mental exercise on a regular basis.

Exercise is important to distract dogs prone to inappropriate chewing or other destructive behaviours. A tired pup is less likely to get to have the energy to pursue the chewing habit.

Exercise produces endorphins, which has a calming effect. It is these endorphins that are stimulated by chewing. So if your dog is not getting enough exercise, he may turn to release this pent-up energy endorphins through chewing.

Exercise should be according to your dog’s age, health and breed characteristics. By engaging with your dog and encouraging plenty of people-time, your dog will learn socially acceptable behaviour and won’t learn inappropriate behaviour in the yard by himself.

A combination of patience and effective training techniques will help cease the excessive chewing and improve the bond with you and your dog. Learning how to stop your dog from chewing is about helping your dog. And let’s not forget that your stuff will remain intact.