You are here: Home / Blog / Why Do Dogs Eat Poop from Other Animals? Or their Own… 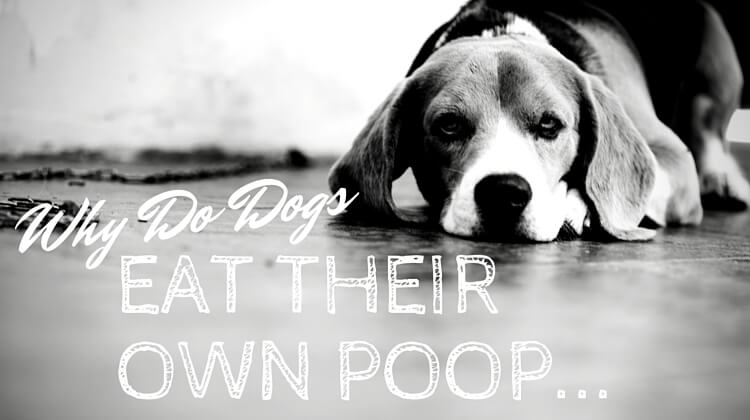 Just like significant human behaviour, dogs have their very own motives for their peculiar behaviour.

An invisible line is drawn with regard to certain types of eating habits when it comes to differentiating between dog mannerisms from humans. Yes, it’s their poop eating habit.

Coprophagia, is the scientific definition of the act which in which dogs to consume their own faeces.

There are various reasons to why your dog eats its poop or the poop of other dogs. Here are ample of reasons to why you dog has being doing so, what needs to be done to address the issue and how you can train your dog to stop this menacing habit.

Thousands of years long before dogs were domesticated, they were scavengers, hunters, living off scraps of rotten meat and whatever they could find, including the waste of other animals and other dogs. This eating habit may be a remnant of dog history and has passed on through generations.

Even in a newborn litter, the mother wolf  keeps her den clean by swiping off any form of scent so as to avoid attracting predators.

Licking is a means of grooming which makes cleaning up after her young ones by eradicating their poop an instinctual and a completely normal habit.

Fast forward many years later, this behaviour can be seen in domestic dogs too.

In a  household with multiple dogs and general dog packs, there is a hierarchy order of dominant and submissive roles. As a display of submission, the lower ranking members of the pack may sometimes eat the stool of their dominant counterparts.

Dogs are fast learners, picking up things quickly, even things that you don’t want them to. Punishing dogs for home accidents like biting off furniture and shoes by rubbing their nose in poop, is an incorrect training technique. This will only confuse your dog in understanding what is socially acceptable and unacceptable in a domestic household.

Cleaning up immediately after your dog while he looks on, may lead him to misunderstand your actions. Hence, he may try to copy your actions by literally picking up after himself.

Keeping this in mind, when your dog  sees other dogs poop, he may attempt to clean after them too!

Because of the fear of being punished for defecating in the house, she may eat her faeces in order to hide the evidence. If and when a dog defecates indoors, it could be because she is unable to hold it. Dogs would never poop indoors for spite.

A responsible parent should teach and potty-train their pet rather than resorting to punishment tactics. Remember that elimination in the house could indicate a serious health or medical problem.

Dogs have sensitive digestive systems which depends on a specific mix of enzymes to break down carbohydrates, proteins and fats.

Some researchers state that dog digestive systems haven’t quite evolved to process modern diets. To improve their digestion patterns, some dogs eat stools to replenish enzymes and speed up the digestion process. Evidence also suggests that when dogs lack nutrients especially vitamins like A and B, they resort to Coprophagia.

Another common theory is that overfeeding a dog can lead to coprophagia. A contrary case would be an overly fed tummy which makes absorbing all of the food nutrients difficult leading to a dog to reach out to his nutrient rich waste.

Many dogs eat their stools solely for the attention of their owners. Negative attention is still attention, and even if you’re scolding your dog for their bad conduct, it will only reinforce it.

Bored and lonely dogs may play and eat their stool as a pastime.

Some dogs instinctively carry things in their mouths. But carrying faeces around signals that the dog needs more daily physical and mental exercise and interaction with his family and people too.

Sometimes the dog may be consuming faeces out of anxiety or stress too. The emotional stress of isolation or being restricted to an area for long time periods without the interaction of the pets family may lead some dogs to eat their own faeces.

If there’s lack the access to some real food, any dog would get hungry.

The food you feed your dog may be lacking in the nutrition needed or is inappropriate for your dog with regard to his size, weight and age. If a dog is not fed properly and low-quality dog food, he feels the need to eat more of it and attempts to alleviate his body’s need for nutrients by eating his stools.

Even when it comes to overfeeding, a substantial amount of the food remains undigested. As the resulting stool smells fairly similar to the previously consumed food, the dog tries to eat it.

Pet parents need to pay closer attention to their pets food habits as stool eating can be seen as a cry for health. Internal parasites leach onto the nutrients supplied by the direct food  which may lead a dog to consume faeces in the search for minerals that the body lacks.

Isolation and confinement to small spaces, whether in a kennel or chained and restricted to a small may lead a dog to eat his faeces to keep himself occupied or clean his private space.

Piled up poop in the yard or even a kennel may make a dog want to clean up his stools. It’s important to ensure cleanliness in the dog’s area every day, especially after the dog excretes, before the dogs resorts to their own versions of housekeeping.

How to stop your dog from eating poop

The Coprophagia problem can be solved with a  combination of dietary, behavioural changes and bit of experimentation. The habit is hard to break since it is self-reinforcing, but don’t let that discourage you.

There are other alternatives and products, that can be applied to make the poop less attractive to your canine. These are available at general stores (or online) and veterinarians.

By covering the stools with hot sauce, which is uncomfortable to eat but has no real damage, a bite or two would make most dogs decide it isn’t really worth it!