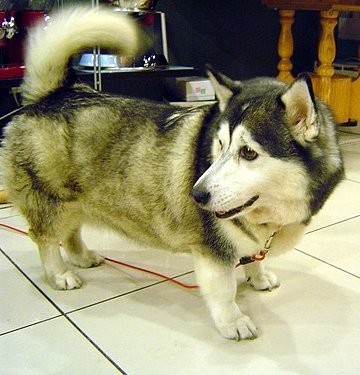 One of the most beautiful cross breed of a Welsh Corgi with other dog is the Corgi Husky Mix and it is commonly referred to as a Horgi. Some people may also call it a Siborgi. Even though the Husky is a sledding dog and the Corgis are herding dogs, so their cross is somewhat of an advanced herding dog exhibiting traits such as high energy levels and attentiveness.

The major reason for this cross are to get a small sized dog such as the Corgi with combined qualities with those of a Husky. The Corgi Husky mix easily adapts to various weather conditions and will survive in most areas.

Horgis are sociable and with early training, can be good with kids. Training of this cross breed is highly recommended.

These dogs have a height of around 13 inches. The weight varies a lot in individual dogs in the range of 20 to 50 pounds. Life expectancy is similar to the parent dogs between 12-15 years.

The Horgi at times resembles the German shepherd.  They are close to the ground and have a small sturdy frame. They have short legs like the Corgi. The ears are erect and the head rounded. The eyes of this Corgi Husky mix have an almond shape with a black or brow coloring.

You can also have a look at the below video presenting Seph, the Husky Corgi Mix from Xzadows X

The Horgi coat is double coated and comes in shades of red, sable and brindle. If one of the parents had one color which is not among those then the Horgi can take it.

Depending on the individual dog, they will have medium to heavy shedding. The Corgi is a heavy shedder all year round. The Husky is a high shedder as well due to their double coat.  Keep in mind that daily grooming is highly advised to control the shedding.

This double coated fur is very useful in wet environments since it is water resistant, thus keeping the dog warm. Even when bathing the Horgi, you’ll take some time to get the fur wet.

The Horgi has an easy going and sweet temperament. They are sociable, friendly, gentle dogs. If the cross leans more on the Husky side, this Horgi will be a very good family dog getting along with the whole family and also visitors. Similar to Corgis, they have a good temperament and they are always alert. They make loyal pets. That being said, training is important and I would also add, necessary.

The Horgi is very intelligent, inheriting this trait from both parents, its easily trained and from an early age, it will have an understanding of what is acceptable and what’s not.  In order to make sure that your dog maintains a good temper and gets along with people, especially kids, it will be important to enroll it in a training class early in life. With good training and socialization, you’ll be able to travel with them wherever you go.

<< – The Complete Guide for Corgi Existing and Future Owners – > >

The Corgi Husky mix usually has back problems which is something very common to Welsh Corgis. This is a genetic problem that afflicts both parents. It doesn’t necessarily mean however, that your Horgi will automatically get a back problem. With careful breeding, the risk of a back problem can be minimized.

The Horgi, just like their parents have a good appetite and can easily add up the pounds which can lead to health problems. It is highly advisable to have a good daily exercise.